Miss Florence Drew, a Canadian by birth, arrived in Hong Kong in 1909 with $40 in her pocket and no promised support. She was a typist in Chicago and carried her heavy typewriter with her to supplement her meager income.

Her passion was to reach the very least-reached peoples who were too poor to own land and who lived on boats in Hong Kong, Canton and the Pearl River Valley. She founded the South China Boat Mission, and over the years, 40 boat churches were planted, thousands of people heard the good news of Christ, a leprosarium was established, schools were founded and boat children were educated.

When the communists took over, ministries expanded to numerous boat people in Japan and Bangkok and to Chinese in Mauritius.

Benjamin Davidson of Scotland, working as a cloth merchant in India, had a love for sharing Christ with the people he met. His vision grew, and in 1930, at the age of 69, he began the India Mission. Davidson’s driving passion was for prayer and the salvation of souls. The work grew to over 250 churches. Many of these were planted by Indians from Hindu backgrounds.

After World War 1, thousands of refugees and orphans poured into western Iran from surrounding countries. In 1921 Francis Stead took seven orphans and established the Faraman Orphanage and Industrial School near Kermanshah, Iran. His goal was to raise the orphans in a Christian environment, plant a church and help farmers to farm more productively. During World War II, Allen McAnlis, who was a chaplain’s assistant in Iran, visited Faraman and caught a vision for the orphanage. After military service he began the Iran Interior Mission and returned in 1950. 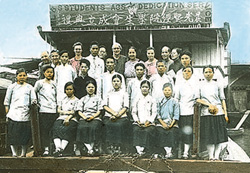 In 1967, Boat Mission merged with Christar (known then as International Missions).

Christar is born from International Missions

In order to further clarify its vision, International Missions changed its name to Christar in 1999.

Today Christar has over 300 workers serving among the least-reached in over 25 countries in over 70 different people groups!

By bringing the hope of Christ to the least-reached peoples, our desire is that long after we have gone, reproducing bodies of believers will be left behind! While one or two believers may be dependent upon a worker, an established church is independent of the worker and in turn becomes part of the worldwide body of Christ.